CHARLESTON – After spending $5.6 million during the last presidential election year, outside groups have reported spending more than $15 million on West Virginia elections so far in 2016 — closely rivaling the $16.3 million in reported spending by candidates for executive, legislative, and judicial offices.

This year’s outside spending by race breaks down as follows:  Attorney General – $5.3, Governor – $3.7, Supreme Court – $3.6 million. Third party organizations have also spent $2.4 million in various state Senate races, with more than $900,000 going into the race for a seat in the 4th Senatorial District currently held by Senate Majority Leader Mitch Carmichael (R-Jackson). To date, groups have spent $186,175 attacking Carmichael and $661,068 supporting his Democratic opponent Brian Prim.

As West Virginians begin going to the polls, a coalition of organizations working to increase accountability and transparency in elections released a report highlighting the growing role of outside spending in state elections and the need to strengthen disclosure laws so that voters can be better informed about who is trying to influence their votes.

“If we want a government that is truly of, by, and for the people, we must demand an electoral system that puts the voices of everyday voters first,” said Natalie Thompson, co-coordinator of WV Citizens for Clean Elections (WVCCE). “To address the money being spent by special interest groups, our next legislature must make election transparency a top issue. Full disclosure of campaign cash is an important step to ensuring our government works for all of the state’s residents, not a few anonymous donors. All West Virginians have a right to know exactly where the money is coming from,” stated Thompson.

The report, prepared for WVCCE by recent Marshall University graduate Logan Bush, profiles super PACs that were active in the 2014 election and the May 2016 race for the West Virginia Supreme Court of Appeals. The report also details potential conflicts of interest by legislators who benefited from expenditures paid for by these organizations. An addendum to the report provides an overview spending by third-party political groups during the current election cycle. Spending totals and analysis are based on a review of disclosure reports filed with the Secretary of State.

Bush said the report shows the need for reform. “West Virginia needs a government that represents all of its citizens, not one that only represents a select group of outsiders and corporations,” said Bush.

In addition, to calling attention to the outside money being spent by various special interest groups, the coalition’s report also makes specific policy recommendations. Although the U.S. Supreme Court decision in Citizens United, has made oversight and regulation of campaign finance more difficult, disclosure is a key area of reform allowed under the decision. Accordingly, WVCCE supports requiring any group that spends more than $1,000 in a calendar year to influence our elections to disclose its donors to the Secretary of State and closing the “covered transfers” loophole that allows wealthy donors and special interests to funnel money through multiple PACs and organizations in order to obscure its origin.

“It’s important to keep in mind that our analysis only includes spending that was disclosed to the Secretary of State,” said Julie Archer, co-coordinator of WVCCE. “Unfortunately, under current law it would be impossible to fully determine the amount of money being spent on our elections or even to know the identity of who is behind some of the groups that have filed disclosure reports. A first step to fight back against big money in our elections is to make sure that every group – liberal and conservative – attempting to sway our elections has to disclose where the money came from,” Archer said.

The top spending groups this election cycle are:

Among the reports key findings: 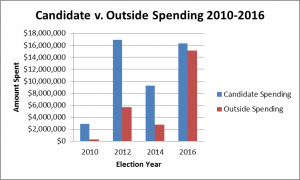