Every day, West Virginians pay a heavy price due to the influence of money in politics. An opioid crisis, insufficient resources for our schools, persistent poverty, and lack of opportunity continue to plague our state. Regular West Virginians know how to solve these problems, but our voices are not heard in the halls of power.

The modern campaign system is broken and prevents elected officials from solving big problems. The vast majority of elected officials in West Virginia are hard-working, ethical people who want the best for our state. Unfortunately, candidates must raise a massive amount of money to run for office. This makes candidates dependent on big donors that drown out the voices of average West Virginians who can’t afford to contribute. Consequently, most voters believe that powerful interest groups use their donations to steer policy in the direction of their own interests, which may not be in the public interest.

Now we have a solution to fix the problem. The Pro-Democracy, Anti-Corruption Platform is a set of common sense solutions that can help put our government on a path to solve problems that affect us all. This is not about Democrat vs. Republican; this is about fixing a broken system, and moving toward a government that’s more transparent, accountable, and responsive to the needs of ALL West Virginians.

The Pro-Democracy, Anti-Corruption Platform would increase accountability and transparency in West Virginia elections, make voting more accessible to all citizens, limit the influence of big-money in politics, ensure fairness and impartiality in our courts, and increase citizen participation in the electoral process.

Will you support our Pro-Democracy, Anti-Corruption Platform?

EVERYONE DESERVES TO KNOW

Voters have a right to know who is spending money to influence our votes and our elected representatives. The Legislature should strengthen disclosure laws in elections and increase transparency of campaign and lobbying activities to give the public more information on who is impacting our elections and legislative decisions.

EVERYONE IS HELD ACCOUNTABLE

An open and transparent government requires strong enforcement of our laws and real consequences for those who violate them. The Legislature should close loopholes in our election and ethics laws, and make sure that state agencies and prosecutors have the tools they need to ensure enforcement and accountability, and combat corruption.

Democracy requires everyone to have voice in the decisions affecting their lives; from equal access to the ballot box, to the right to have your voice heard above the special interests that try to buy our elections. The Legislature should give a greater voice to each citizen and lower barriers to participation in political life in the following ways.

Changing the Way Elections Are Funded and Empowering Small Donors

Protecting and Expanding Access to the Polls, and Increasing Voter Participation 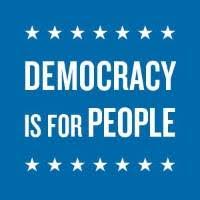