Starting Tuesday, the Legislature’s Joint Committee on Redistricting will host a series of public hearings around the state to allow West Virginians to weigh in on the process of redrawing the boundaries of legislative and congressional districts. This often overlooked, yet important part of our electoral process happens every 10 years after the US Census to account for changes in population. The districts that are drawn this year will impact our lives for the next decade, and if they aren’t drawn fairly our communities will be left without representation and certain voices will be silenced. That’s why it’s important to come together to speak out on fair districting so that our communities are whole and have equal resources to meet our needs.

Each hearing will take place from 6 to 8 p.m. Hearings are scheduled for the following dates and locations, and are subject to change:

Dates for three virtual public hearings will be announced separately.

Unfortunately, when politicians draw the lines, too often their political interests are put ahead of our communities’ needs. A recent report by the non-profit RepresentUs identified West Virginia as being at “extreme risk” of having unfair districts for the next decade. When politicians draw maps to pick their voters, instead of the other way around, it’s called gerrymandering.

As a result of these changes, this year’s redistricting will be particularly consequential, and we, the voters, should be leading the process. So let’s take advantage of the upcoming hearings to let legislators know that when it comes to our districts, we want a transparent process we can trust, where communities remain whole and where voters have an equal voice. By joining together to speak out on fair districting, we can make sure our communities have the resources they need to thrive in the decade to come.

To learn more about redistricting, how the redistricting process is going to work in West Virginia this year, and what you can do to get involved check out these resources compiled by the League of Women Voters of West Virginia. 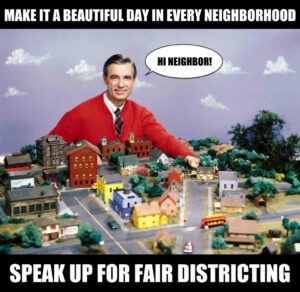