Coalition says voters must have a voice in choosing new justices

(Charleston, WV) With impeachment trials for current and former members of the WV Supreme Court of Appeals set begin in the State Senate tomorrow, a coalition of citizen groups working to increase transparency and accountability in West Virginia elections is worried that the legislative response to the recent spending scandal could enable a single party, through a pre-planned partisan impeachment process, to seize control of the third branch of Government for the next two years.

WV Citizens for Clean Elections (WVCCE) is urging West Virginians to sign on to the groups’ Our Court, Our Vote petition, which is addressed to Governor Jim Justice and members of the WV Legislature, and which demands a prompt and transparent special election for any open seats on the Supreme Court.

The petition may be signed online at: https://wvoter-owned.org/our-court-our-votes/.

“Voters are right to be outraged over the justices’ spending, but it’s clear that many are concerned that these proceedings and other recent events are a threat to an independent judiciary,” says WVCCE coordinator Julie Archer.

“Impeachment and removal of office should be a last resort, and partisan interim appointments in a process that is behind closed doors only make trust in the court and our democracy worse,” Archer says. “Neither party should be able to steal or stack the court for political advantage. We are demanding that the voters’ voice is heard in electing any new judges in a clean and transparent judicial election.”

West Virginia founders entrusted the people to elect their judicial officers and thus any vacancy to our court should be filled by a vote of the people.

The current scandal sweeping the West Virginia Supreme Court makes West Virginians justifiably outraged. We demand that the voters’ voice is heard in electing any new judges in a clean and transparent judicial election.

Legislators on both sides of the aisle are seeking to restore trust in the court. But impeachment is at best a partial solution. Partisan interim appointments in a process that is behind closed doors from voters will only make our public trust in the courts and our democracy worse.

What’s needed now, more than ever, is transparency with the voters of West Virginia, and that means allowing us to choose any new justices to sit on the court in open, transparent elections. To achieve this, the legislature should do the following:

West Virginians understand the critical role that the judicial branch plays in our lives and our democracy. The current misspending by the court is absolutely unacceptable. However, our judges should not be chosen behind-closed-doors, in a partisan process by the Governor and a few big money donors. Voters have been afforded the right to vote for our justices and deserve to have their voice heard in a fair and clean election.

Moreover, we must pay attention not just to the money flowing out of the court, but the special-interest money flowing into our judicial elections. As officials entrusted with ensuring the quality of full, free, and fair elections, we expect you to be committed to these outcomes as well. 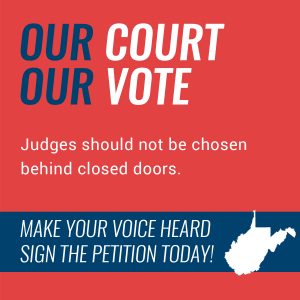