Five days from the election, outside spending in West Virginia elections has reached $19.2 million this election cycle. Outside groups have reported spending an additional $4.1 million dollars over the past week.[i] (For comparison, a second round of disclosures by candidates for executive, legislative, and judicial offices shows they have spent $21.7 million to date.[ii]) More than half (61%) of the spending reported over the past week, was spent by Mountaineers Are Always Free PAC and the Republican Governors Association’s Right Direction PAC. Both have spent more than a million dollars since October 25 supporting Attorney General Patrick Morrisey and Bill Cole and attacking their Democratic opponents. 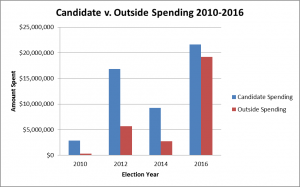 This year’s outside spending by race breaks down as follows: