Two measures we oppose related to West Virginia courts were passed by the WV Legislature. One was signed into law by the Governor last week. The other will go before voters in November of 2022 in the form of a proposed amendment to the state Constitution.

As the legislative session was coming to a close, Governor Justice signed off on the Legislature’s plan (SB 275) to establish a new intermediate court of appeals long sought by corporate interests, primarily for civil appeals, as a way to stack the deck against regular West Virginians. The new court is slated to be up and running on July 1, 2022. In the meantime, the Governor will appoint the court’s three judges, who will then run for 10 year terms in the 2024, 2026, and 2028 elections; and the Supreme Court has said it’s ready to move forward with developing the procedures and rules for how the new court will operate.

According to the Institute for Southern Studies, West Virginia isn’t the only state reorganizing its judicial system and revamping or adding new appeal courts for the benefit of special interests.

In addition to creating the new intermediate court, which will review most trial court decisions before they reach the state Supreme Court, SB 275 also makes other significant changes to West Virginia’s judicial system, including changes the process of appealing objections to workers compensation claims that attorneys for injured workers, some of whom spoke at a public hearing on the bill in March, say will politicize the process and deny or delay justice for their clients.

Unfortunately, SB 275 isn’t the only challenge to fair and impartial courts in West Virginia. The Legislature also passed HJR 2, which proposes to amend the state constitution to make it so that no court in the state could intervene to protect the right to fair hearing of a public official facing impeachment, no matter how frivolous the charge or constitutionally flawed the process.

As I wrote in a recent op-ed in the Charleston Gazette-Mail, the disaster scenarios write themselves. If the amendment is approved by voters, courts wouldn’t be able to intervene if lawmakers impeached an official on discriminatory grounds, such as their race or sexual orientation.

Supporters of the resolution have responded to these and other very real concerns with little more than hand waving. Yes, they admit, all those things could happen under HJR 2, but the Legislature would never actually abuse its power in such a way. But why take that risk?

The drafters of our state constitution realized the importance of separation of powers. When one branch of government has too much power, the entire system can be undermined. It’s not enough that lawmakers promise not to abuse their power.

In addition to the impeachment amendment, there will be two other constitutional amendments on the ballot next year. One (SJR 4) would allow churches and religious denominations to incorporate. The other (HJR 3) would allow lawmakers to lower personal property taxes paid by businesses on inventory, machinery and equipment as well as the taxes people pay on their vehicles. In addition to taking power and control from local communities and giving it to the legislature, this could lead to drastic cuts in revenue that currently provides funding for vital services like schools, fire and police, and libraries.

We’re still figuring out the implications of the amendment to allow churches to incorporate, and having conversations with partners and allies regarding legal and other strategies for stopping these measures. We’ll continue to keep you updated as we learn more, so please stay tuned. 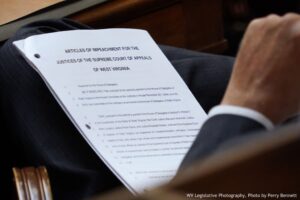