Several bills that advance the goals of the Pro-Democracy, Anti-Corruption Platform have been introduced and the list keeps growing. In addition to bills that are part of the platform we are also monitoring other legislative proposals related to our courts. Here’s a glimpse at some of these bills, what we have to gain if some reforms are passed, and what’s at stake if others advance.

As we marked ten years since the US Supreme Court issued its decision in Citizens United v. the FEC, Democrats in the WV Senate introduced several bills to increase transparency of political spending in West Virginia elections. Most notably, SB 581 would require disclosure of dark money political expenditures to allow the public to know who is paying for political advertisements.

This dark money spending is no longer limited to the election. Last year, for example, a secretive group with unknown donors is attacking lawmakers for standing against them to oppose granting a multi-million-dollar managed-care contract for West Virginia foster children. This session, a group calling itself U.S. Term Limits has been flooding mailboxes around the state with fliers critical of legislators who have not signed their term limits pledge.

It’s time to put an end to big money funneled through groups with secret donors by requiring timely online disclosure of all political spending. SB 581 would do this by closing loopholes in our election laws that allow groups that spend money on political advertising to hide the identity of their donors. We have a right to know who is spending money to influence our votes and our elected representatives!

In addition to SB 581, the same group of Democratic senators introduced a bill (SB 566) that would rollback the disgraceful provisions of last year’s SB 622, which more than doubled (and in some instances quintupled or more) the limits on how much money one person can give to candidates, PACs, and political party committees. The new higher limits only benefit a few of the wealthiest campaign donors in West Virginia, and when I say few — only 124 people reached the limit on their donations to a candidate in the 2018 election cycle.

We have contribution limits to prevent corruption, but the other important function of contribution limits is to ensure that all West Virginians, no matter how much they make, have an equal voice and equal representation with their state elected officials. The new higher limits now in effect violate this fundamental principle of fairness by giving a greater voice to the wealthy and special interests that try to buy our elections, and that’s wrong!

Eliminating Barriers to the Ballot Box

It’s encouraging that the first bill to pass both the House and Senate is a bill aimed at making voting more accessible and eliminating unnecessary barriers to the ballot box. SB 94 will allow voters with certain physical disabilities to cast absentee ballots electronically. The bill is intended to ensure that absentee voting is accessible to all voters and compliant with the Americans with Disabilities Act. Although some legislators raised legitimate concerns about the security risks associated with online voting, the goal of the bill is laudible.

In addition to SB 94, other bills to expand access to the polls and increase voter participation have been introduced in both the House and Senate. These include, SB 99, which would allow voters who register in person at the office of the County Clerk to register and vote on the same day during the early voting period; and HB 3077, which would allow voters to register and vote the same day on election day. We’re also awaiting introduction of a bill that would give counties and municipalities the option to participate in a vote-by-mail program.

Unfortunately, in West Virginia, we are suffering from a decline in voter participation, but with sensible policies like these that lower barriers to participation in political life, we could join healthier democracies where voters are encouraged to participate, with dramatic results. For example, nine of the top 10 states in turnout — those with turnout averaging 61 percent — offer same-day registration, full vote-by-mail (also known as “vote at home”), or both, according to a report by the nonprofit VOTE Foundation. By comparison, the bottom 10 states, which lack policies like these, had turnout averaging just over 43 percent, nearly 20 points lower.

The important decision of who will serve on the state Supreme Court isn’t decided by a small plurality of voters. To address this, the House Judiciary Committee passed HB 2008, which would require that a run-off election be held when no candidate receives a majority of votes cast in the nonpartisan election of justices of the Supreme Court of Appeals. The bill was prompted by the results of the November 2018 special elections to fill two vacancies on the Supreme Court, where the Governor’s appointees Tim Armstead and Evan Jenkins won with 26% and 36% of the vote respectively in a crowded field of 20 candidates (10 for each seat).

Under the proposed bill, if no candidate for a seat on the Supreme Court receives more than 40 percent of the votes cast in the election held for that office in conjunction with the primary election (when judicial elections are now held), a runoff election will be conducted during the general election. In the case of a special election held in conjunction with the general election, the run-off would take place within 90 days. HB 2008 was referred to the House Finance Committee due the cost associated with holding a runoff in this situation.

Another downside of a stand alone run-off would be the potential drop off in participation (20-30% fewer voters tend to turn out for run-off elections in many states). But there’s yet another downside to run-off elections more generally — giving special interests more opportunity to influence the outcome. Ranked choice voting system in which voters rank candidates in order of preference is an alternative solution that avoids the drawbacks associated with run-off elections.

In the Senate, the members of the Judiciary Committee have once again advanced a bill to establish an intermediate court of appeals, which would drag out appeals that would end up in the Supreme Court anyway, to the advantage of parties with greater financial resources. As initially proposed, SB 275 would have created the first unelected judges in the history of West Virginia, and allowed Governor Justice to appoint all the members of the ICA. You can read more about this perennial court packing scheme here.

SB 275 was on the Senate Judiciary Committee’s agenda for Monday, and an amended version of the bill the judges would stand for election after their initial appointment. However, the bill still creates a a whole new layer of state government in our judicial branch that isn’t needed. Click here to tell legislators that the millions that would be wasted on an unnecessary intermediate court is better spent on things West Virginia needs — road repairs, better schools, job training for workers, broadband access and more!

On Wednesday, the Judiciary Committee passed SJR 7, the “Preserving the Separation of Powers Amendment” to the state constitution. While this sounds good on its face, we are still evaluating the ramifications of this proposed amendment, which is intended to clarify that courts are without authority to interfere with proceedings of the Legislature in light of the substitute Supreme Court’s intervention in the impeachments and trials of the members of the Court.

We’re prepared to push back against measures like these that would undermine the independence of the judiciary and provide more opportunities to pack the courts. We’ll be keeping a close eye on these, as well as other proposals to increase accountability and transparency in West Virginia elections, limit the influence of big-money in politics, and make voting more accessible to all citizens, so stay tuned. 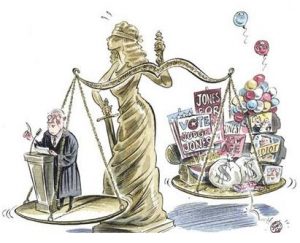