In his remarks at our Stand Up for Voting Rights press conference and rally, Rick Martin, President of the Charleston WV Branch highlighted the NAACP’s recent report, “Weaponizing the Bench to Suppress the Vote.”

The right to vote defines our nation as a democracy. But our longstanding struggle for inclusion requires constant vigilance. The Shelby County decision was an assault on our democracy. It unleashed a proliferation of voter suppression laws that have blocked our communities from the political process. Instead of using the power of the federal government to defend communities of color against the barrage of anti-democratic actions, the Trump administration has doubled down to further voter disenfranchisement.

For better or worse, the federal courts have always been key to the civic engagement of African Americans. The judiciary plays a substantial role in defining the contours of the right to full political participation afforded by the Constitution and civil rights laws. When presiding over voting rights and all other cases, federal judges must be fair, impartial, and committed to equal justice under law.

Donald Trump’s appointees to the Supreme Court, federal appellate courts, and federal district courts have appalling records of defending, enabling, and, in at least one instance, engaging in voter suppression. There is no mistaking that Trump’s judicial selection has become a central feature of this administration’s broad-based assault on voting rights. This must end, now. It is time for the country to rise up and object to this extraordinary perversion of the judicial appointment process to undermine our democracy. The American people are entitled to judges who will decide cases on the facts and the law, not deeply rooted ideology or rank partisanship. Our rights to fully participate in every facet of political, social, and economic life, on an equal basis, lie in the balance.

You can read the full report here.

Rick concluded by saying, “We’ve come too far to turn back. We’re urging you all to contact your congressional representatives. Do all you can to insist on the restoration of the Voting Rights Act.” 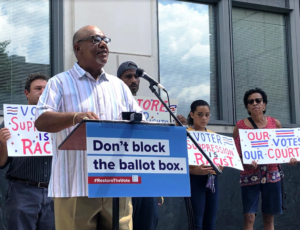