The Voting Rights Act was signed into law 54 years ago on August 6, 1965.  It was the most comprehensive piece of legislation passed to ensure that voting rights were awarded to all citizens, especially racial minorities and one of the greatest  achievements of the 20th Century Civil Rights Movement. But when voting rights advocates in West Virginia and around the country gathered last month to mark the anniversary of this important date, we weren’t celebrating. That’s because, just six years ago the U.S. Supreme Court effectively decimated the Act.

That decision, in the case of Shelby v. Holder, knocked our democracy off balance and made it easier for states and localities to revert to discriminatory practices that restrict the voting rights of black, brown, Native American and Asian American people. Just last week, the Leadership Conference on Civil and Human Rights released a report documenting the closure of over 1,600 polling places in the wake of this decision.

Since the decision, a number of states have implemented laws that disenfranchise voters, and disproportionately affect young people and communities of color — including strict voter ID laws, gerrymandering and voter purges.

Enough is enough! Congress must pass the Voting Rights Advancement Act (HR 4) and restore our ability to prevent racial discrimination in voting so that we can build the truly representative democracy that we deserve.

But we aren’t just dependent on Washington. It is also incumbent upon individual states, counties, and cities to prioritize policies that protect our freedom to vote and keep our elections representative of what we, the people, want. Moreover, millions of Americans have sent a clear message that they want a system that works for every voter, where everyone, regardless of race, color, age or income can participate. In 2018, voters turned out in record numbers to support laws and policies aimed at making voting more accessible and eliminating unnecessary, racist barriers to the ballot box.

In West Virginia, pro-voter advocates envision a state where elected officials don’t make it harder to vote, but rather ensure that every eligible citizen has a chance to make their voice heard. That’s why we’re excited that our state has the distinction of being one of the first states to enact automatic voter registration (AVR) in 2016. It’s a streamlined process that registers a voter or updates their registration when an eligible citizen interacts with the DMV.  And, of course, they may choose not to register or have their information updated. No one is required to register. And in the wake of the Shelby decision, it is policies like AVR, and other reforms that provide new opportunities for people to register and vote, that affirm our civil rights, which need our support.

Unfortunately, in West Virginia, we are suffering from a decline in voter participation, and AVR has been slow to be implemented. We started in the lead, but this puts us behind other states with healthier democracies where voters are encouraged to participate, with dramatic results. For example nine of the top ten states in turnout — those with turnout averaging 61% — offer same day registration (SDR), full “voting at home” (also known as vote by mail), or both, according to a report by the Non-Profit VOTE Foundation. By comparison, the bottom 10 states, which lack policies like these, had turnout averaging just over 43%, nearly 20 points lower.

Same day registration has worked flawlessly for 40 years and has enfranchised countless numbers of voters who otherwise would have been turned away from the polls. With vote by mail, election officials send ballots to all registered voters two to three weeks before the election, and voters can mail them in or drop them off in person as designated sites. AVR, the newest reform to come on the scene, increased registrations in all of the states where it has been implemented, according to a recent report by the Brennan Center for Justice.

With sensible policies like these, that don’t get in people’s way, we can better reflect the will of the people and therefore elect a government that is accountable to our communities, not powerful special interests. Anyone who supports these common-sense proposals can sign on to WV Citizens for Clean Elections’ Pro-Democracy, Anti-Corruption Platform to tell politicians its time West Virginia was in the lead again.

West Virginia has come too far in advancing election modernization efforts to not properly implement automatic voter registration. When we implement AVR well, we can save taxpayers money, and improve election security and public confidence that every vote cast will be counted, but there’s more we can do as a state to fulfill the promise of American democracy, so that every West Virginian has an equal opportunity to elect leaders who represent us and what we want for our communities. Additionally, Congress must deliver at the national level by passing the Voting Rights Advancement Act to ensure that we have the tools we need to address current racial discrimination in voting.

Julie Archer is Project Manager at WV Citizen Action Group and Coordinator of WV Citizens for Clean Elections, a coalition supporting reforms to strengthen democracy and ensure fairness and impartially in our courts. A version of this commentary was published Sept. 25 in the Charleston Gazette-Mail. 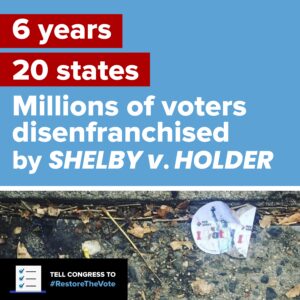