May 10th is Election Day for one of our state Supreme Court seats and with the events leading up to the passage of West Virginia’s public financing program judicial elections, our hope is that participation in the program this year will improve confidence in our judiciary and lead to a courtroom without corruption.

Because of the $3 million Don Blankenship spent in support of then-candidate now-Justice Brent Benjamin, and the subsequent ruling that let Massey Energy off the hook for a $50 million jury verdict, the Mountain State decided to limit big donors’ potential power in the courtroom.

Our legislature voted to provide an alternative option to the way we finance judicial elections, recognizing that we needed to restore confidence in our Supreme Court. They passed a public financing law that would allow candidates running for a seat on the court to qualify for public funding by meeting criteria that engages a wide array of constituents in the process, moving away from wealthy donors and special interest groups.

They recognized that our court system is too important to be subjected to the wills of moneyed interests. While our other branches have somewhat-unavoidable levels of partisanship and bias, our courts are supposed to remain impartial. If anyone has to appear in court, they shouldn’t wonder whether or not the judge proceeding over their case is going to give them a fair shake. It should be without a shadow of a doubt that our courts are fair to all.

Our state’s judicial public financing system has given voters the ability to choose a judiciary that is truly independent because publicly financed candidates don’t have to rely on support from lawyers and special interest contributors who frequently have cases before the court.

This year, it is clear this system is working. Two of the candidates are using those funds to run for the seat, including Justice Benjamin.

When the opinions of a few wealthy individuals and corporations matter more to public officials than everyday voters, West Virginians pay the price with a state government that fails to take into account the needs of all its citizens. That is a cost we can’t afford to keep paying.

So while Blankenship has had his way in court in the past, his election meddling has given our state the impetus to make major improvements in our judiciary.

It is time to keep West Virginia moving forward. First, to press our employers to take workplace safety laws and regulations more seriously and our current elected officials to stiffen the penalties for those who ignore and violate them.

Secondly, with this year’s likely expensive gubernatorial race, we should be encouraging our public officials to expand public financing to other elected offices. Providing full public financing to qualified candidates who agree to limit their spending and reject private sources, would reduce candidate reliance on special interest money and enable those who lack personal wealth or access to wealth contributors to run a competitive campaign – allowing ordinary citizen to have a greater voice in the political process, both as candidates and contributors.

No single person serving in our government should have to concern themselves with the opinions of wealthy special interest groups or billionaire donors over the voices of everyday West Virginians. The amount of money in your bank account or how much you can spend on campaign ads aren’t a reflection of the intellect and experiences necessary to serve our citizens best.

Public financing allows the voices of average citizens to come first by giving candidates the ability to run solely with the backing from voters in their district instead of relying on contributions from special interests and wealthy donors.  It also reduces the amount of time candidates and officeholders spend fundraising. Once a candidate qualifies for public financing, he/she can focus on substantive issues and serving the public interest rather than soliciting campaign contributions. Expanding public financing is a worthy investment in our elections to ensure voters stay the primary constituency of our public officials.

No matter who are you voting for on May 10th, for the state Supreme Court or Governor, you deserve to know that they will do their best for the state of West Virginia and for each of us, not just their campaign contributors.

A version of this commentary appeared in the Beckley Register-Herald on April 16, 2016.

May 29 2020  WVCCE Blog
Election Day: The Countdown is On and You Can Help Move Others to Action!

May 29 2020  Alerts and Updates
Election Day: Use Your Voice to Move Others to Action! 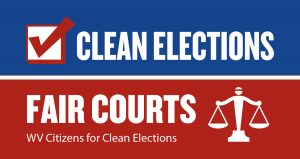 Alerts and Updates  Jun 8, 2020
Tomorrow is Your Chance to Vote for Reform

WVCCE Blog  May 29, 2020
Election Day: The Countdown is On and You Can Help Move Others to Action!

Alerts and Updates  May 29, 2020
Election Day: Use Your Voice to Move Others to Action!

Alerts and Updates  May 18, 2020
Deadline Tomorrow to Register to Vote

Alerts and Updates  Apr 27, 2020
Our Court, Our Vote – Judges Are on the Ballot: Know Your Judicial Candidates

Newsletter  Apr 4, 2020
Reaching Out, Checking In (Plus Action for Voting, Legislative Update)

WVCCE Blog  Apr 3, 2020
Absentee Voting Available to Anyone During the Coronavirus Emergency

Send this to a friend