Join us at the Underground Cinema by WVIFF for October’s Movies That Matter Monday’s Film, ‘Dark Money,’ a political thriller that examines one of the greatest present threats to American democracy: the influence of untraceable corporate money on our elections and elected officials.

What: Screening of ‘Dark Money’

For the first screening on October 1, there will be a panel discussion after the film with election law experts including Anthony Majestro and representatives from our coalition.

Purchase your tickets here.  Join the event on Facebook here.

In the wake of the Citizens United ruling, dark money floods elections nationwide, but Montanans are standing up to stop history from repeating itself in a struggle that has the potential to change the way elections happen across the U.S.

WVIFF Underground Cinema Presents Movies That Matter Mondays – Each month, we will work with a community organization to show an issue-oriented and compelling film relating to their mission.

West Virginia Citizens for Clean Elections began in 2002 to support public financing of elections as a way for ordinary citizens to have a greater voice in the political process, both as candidates and contributors. This “clean money” option to would reduce candidate reliance on special interest money and enable those who lack personal wealth or access to wealth contributors to run a competitive campaign.

WVCCE works to increase accountability and transparency in West Virginia elections, including advocating for full disclosure of political spending so that the public knows who is influencing our elections and legislative decisions.

What the Critics are Saying:

Set in Montana, the home state of the director, this Sundance-nominated film tells its story through the eyes of journalist John S. Adams, a former investigative reporter for the Great Falls Tribune. — Michael O’Sullivan, Washington Post

A case study all too applicable to the nation at large in an era when moneyed interests seem to be trumping (ahem) citizens’ will and welfare on every front. — Dennis Harvey, Variety

Kimberly Reed’s documentary Dark Money — by turns engaging, exasperating and confusing — sets out to shine a light on deep-pocketed, anonymous groups that have meddled in Montana elections. — Manohla Dargis, The NY Times 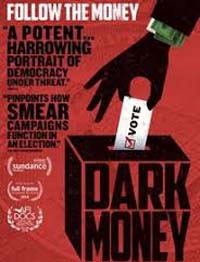 Press Release  Jan 27, 2022
WVCCE Launches Campaign to Inform West Virginians That They May Have Been Removed from the Voter Rolls
Citzens fo Clean Elections © 2015 Frontier Theme
Send this to a friend