I’m writing on behalf of WV Citizens for Clean Elections, as well as the 160 organizations that have joined to form the Declaration for American Democracy coalition. We are focused on ensuring a safe and secure national election in November. The events we saw during Wisconsin and Georgia’s primaries where voters, particularly people of color, faced countless barriers to voting, including absentee ballot delays, polling place closures, five-hour long lines, and broken voting machines, were unacceptable.

The election is just months away, and West Virginia and other states are running out of time to make critical purchases and plans to ensure free, fair and safe elections.

State and federal leaders must urgently invest in and put in place changes across the country so all Americans have equal access to the ballot box, and no American has to choose between their safety and their vote. As we wait for the U.S. Senate to take up debate on the next Congressional coronavirus response package, we ask you to urge Senator Shelley Moore Capito to support and to put pressure on Sen. Mitch McConnell to adopt the election protection reforms and funding included in the House-passed HEROES Act to uphold our nation’s election and democracy. We also urge you to dispel the lies coming from elected leaders, including the president, about the security of these reforms.

Experts estimate that the reforms needed to secure our elections will require a $4 billion investment from Congress for states and precincts to carry out this year ($400 million of which has already been sent to states, without stringent enough requirements to protect voters everywhere). Many of these important reforms are laid out in the HEROES Act, and would significantly boost access to the ballot and ensure voters don’t have to choose between their health and their vote.

Vital reforms in the HEROES Act include:

In West Virginia, we have already has online voter registration, and 10 days of early voting at county courthouses and community voting locations. Earlier this year, the Legislature passed a bill that amends the absentee voting laws to allow voters with a physical disability to receive and absentee ballot electronically, and to vote independently using an electronic ballot markeing tool.

Most recently, West Virginia expanded access to absentee voting to all registered voters due to the COVID-19 pandemic, and Governor Justice issued an executive order and provided funding to mail absentee ballot applications to every registered voter in the state. However, at this point we don’t know if absentee voting will be available to all voters in the general election, or if the necessary exective orders and funding will be in place to mail applications to voters. The latter was crucial to enabling voters to take advantage of this option in the primary, and West Virginia voters embraced absentee voting in large numbers, with half of voters choosing to cast their ballots safely from home.

Because the state’s rapidly aging population makes West Virginians more susceptible to COVID-19, the option to vote by absentee ballot essential to exercising our right to vote safely while protecting our health and the health of others. Ramping up our absentee voting program in the primary required substantially more staff, more working hours, and more equipment and resources. Our county clerks must have the staffing and other resources they need to ensure all West Virginia voters have the option to vote absentee in the general election, and that those who choose or need to vote in person have access to safe, sanitary polling locations that are equipped to protect both voters and poll workers.

The reforms in the HEROES Act are commonsense, time-tested solutions that will make it safe and fair for voters to cast their ballot no matter where they live. There is overwhelming support from the electorate and leaders in both political parties to pass these pro-voter reforms:

Despite this wave of bipartisan support, President Donald Trump has spread lies to fan the flames of fear about election fraud and thereby block reforms or create a diversion that runs out the clock. Considering that Trump himself opted to vote by mail in the 2018 election and 2020 Florida primary, you’d think he would support the program for all citizens.

We cannot allow the right to safely vote become another polarizing issue in our country. No matter who wins in November, the test of our democracy starts with the election itself. We can protect West Virginia voters and protect the vote during this pandemic. And we must. 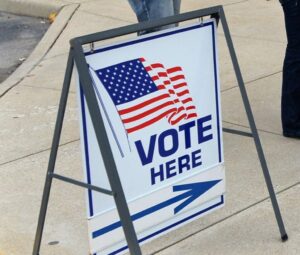