We have all had to pivot very quickly to respond to this public health and economic catastrophe. The last day of the legislative session feels like many months ago but if you want to skip to some old but good news by way of a legislative wrap-up on criminal justice reform, scroll to the bottom.

But first things first: What can be done to reduce the unique threat the COVID-19 virus poses to those who are incarcerated?  Already in dozens of states inmates and/or correctional officers have tested positive, including Illinois, Montana, Michigan, Massachusetts, Texas, New York, Pennsylvania, Wyoming, and Florida. The first federal inmate, Patrick Jones, died this past Saturday after contracting the virus in a Louisiana prison where he was serving a sentence for a drug conviction.

To state the obvious and horrible truth, the social distancing required to prevent the spread of the virus is impossible in overcrowded prisons and jails. While there is a little good news to report as it relates to reducing overcrowding in West Virginia facilities, a much more urgent response is needed from our Governor to prevent a severe COVID-19 outbreak that would put at risk the lives of inmates, correctional officers, their families, and jeopardize our health care system’s overall capacity to respond to this pandemic.

A coalition advocating for an urgent COVID-19 plan for West Virginia’s criminal justice system is focused on four general recommendations:

To this end, the coalition is calling on Governor Jim Justice to issue an Executive Order to reduce overcrowding in state facilities.  Read the press release with key recommendations here.  So far in response, as reported by WV Metro News, roughly 70 work-release inmates who are eligible for weekend furloughs, have had their furloughs home extended.  Also 70 inmates who were incarcerated for parole violations have been released, and according to DMAPS secretary Jeff Sandy, “the numbers of released inmates could grow.”

Public defenders in Kanawha County launched into action by creating a sample COVID-19 motion for attorneys to use to expedite bail hearings for pre-trial defendants and orders for releasing people on personal recognizance bonds.

The coalition sounded the alarm that people incarcerated pretrial were still not having expedited hearings as of last week but instead being held in overcrowded regional jails, and in response the state Supreme Court over the weekend released a follow-up to their administrative order from March 22nd underscoring to magistrate and circuit court judges that bond hearings should be considered an emergency hearing.  Read the memo here.

In collaboration with Division of Corrections and Rehabilitation we are looking for a way to put money into the inmate benefit fund at each facility to expand free communication for every inmate during this pandemic so that they can stay in touch with their loved ones.  If the logistics are worked out, more to come on that!

On the federal level, Congress is considering HR 4018, a measure that allows the two-thirds calculation to include good-time credits so that additional elderly prisoners would be eligible for home detention.  So much more needs to be done.

A great way to stay up to date on COVID-19 responses happening around the country in the criminal justice system, sign up for the Marshall Project’s newsletter.

And slightly off-topic but with the long view in mind, if you are interested in an online “talking circle” as part of the restorative justice exploratory committee’s efforts to expand restorative justice practice and programs in West Virginia, please fill out this doodle poll.  There is a 20 person limit for a session, so depending on level of interest more may be scheduled.  The purpose of the “Virtual Circle” is for connection and shared learning in these dark and difficult times, with a hope too that it might spark ideas for how this process could be used in other supportive ways while so many struggle through this pandemic.

Finally, a look back at what passed the legislature (and what didn’t):

PASSED! H.B. 4958 ends driver’s license suspension for unpaid fines and fees by instead allowing people who cannot afford entire amount up front to enter into a payment plan with the court.  Amazingly the bill is also retroactive so that the 120,000 or so West Virginians who are already suspended can enter into payment plan and get their driver’s license reinstated.

PASSED! S.B. 562  expanding expungement eligibility through among other measures adds conspiracy to commit burglary as an eligible offense, and ensures people are not denied expungement due to technical error on their petition.  Unfortunately the provision to make non-convictions automatically expunged got amended out by the Senate and did not make it into the final version. We’ll work on that next year!

PASSED!  H.B. 2419 reforms our state’s money bail system so that personal recognizance bonds or the “least restrictive means” are to be used for qualifying non-violent misdemeanors unless for good cause shown.  HB 2419 is a positive first step and has given us good precedent as we advocate for release of pre-trial defendants during the COVID-19 pandemic.

PASSED!  H.B. 4004 creates a Sentencing Commission to conduct research and make recommendations to the legislature of reforms to our sentencing laws (that hopefully rationalize and modernize them, reduce mandatory minimums, and won’t take us backwards).

PASSED! S.B. 678 allows people who complete the GOALS (Getting Over Addicted Lifestyles Successfully) program while incarcerated to have all fines and fees waived for the purposes of obtaining a driver’s license.

PASSED!  S.B. 620 authorizes DOCR commissioner to approve home plans for qualifying individuals who are parole eligible – we are calling on Governor Justice to move up the effective date of this bill so people can be released immediately.

Ones that got away…that we will tee up for 2021

H.B. 4670 would have allow courts and prosecuting attorneys to divert certain juvenile cases to a voluntary restorative justice program.  Passed the House but stalled in Senate.

S.B. 484 would have ensured women who are incarcerated receive adequate feminine hygiene products. Passed the Senate but stalled in House.

H.B. 4905 would have “banned the box” on state job applications so that people do not have to indicate conviction or arrest history when they first apply for a state job.  Passed House Judiciary just in time before crossover day but then got moved to inactive calendar by House Rules committee.

If you’ve read this far, thanks for reading.  If you have ideas or insights of how we can most effectively advocate for those who are incarcerated right now, please get in touch.

Stay safe, we are in this together! 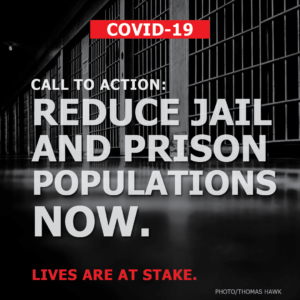