Absentee Ballot Applications Should Be Mailed to All Registered Voters

(Charleston, WV) – With less than 100 days before the General Election, a coalition of voting rights advocates and community leaders representing poor and impacted communities across West Virginia is calling on Governor Jim Justice and state and local election officials to provide further clarity to the state’s voters regarding their plans to ensure a safe, accessible, and secure election and to mailing absentee ballot applications to those voters as was done in the primary election.

In a letter to the Governor, Secretary of State Mac Warner, and Linda Higgins, the head of the WV Association of County Clerks, the groups said, “Giving all West Virginia voters the option to safely vote by absentee ballot in light of the ongoing COVID-19 pandemic is just and right,” but cited the mailing of applications to all registered voters as “crucial to enabling voters to take advantage of this option in the primary, with half of voters choosing to cast their ballots safely from home.”

The Secretary of State’s office confirmed Monday that voters will be able to cite COVID-19 as a medical excuse to vote absentee in the upcoming election. In a press release, Secretary Warner said, “West Virginia voters should never have to choose between their health and their right to vote. Let me be very clear. Any voter concerned about their health and safety because of COVID-19 will have the option to vote by absentee ballot.”

“Ensuring all voters can utilize the absentee process is a common-sense step,” said Eli Baumwell, Policy Director for the ACLU of WV. “Now we call on our elected officials to keep the same process they had during the primary by mailing absentee ballots. This will reduce confusion and encourage voter participation.”

Jean Evansmore, a Coordinating Committee Member with the WV Poor People’s Campaign, expressed anger saying, “We now have more COVID-19 cases and the Governor and Secretary of State are proposing they do less? Why would we accept that? It is voter suppression under the guise of voting ‘opportunities’.”

“We are continuing our efforts to get it done the way it was done in the primary,” Evansmore said. Those efforts include a letter writing campaign targeting the Governor and Secretary of State.

The letter from the groups acknowledged that voters will have an online option for requesting absentee ballots for the November election, but expressed concern that it would not help many older West Virginians or those without internet access.

Jonathan Rosenbaum, President of the League of Women Voters of WV said, “As an experienced software developer, one of the downsides of a new online portal put together on such short order is that it may have some unresolved bugs, some that may cause worse delivery issues, than the so called ‘issues related to the U.S. Mail service’ the Secretary of State’s office highlighted in their after action report.”

Rosenbaum said election officials needed to make the extra effort to inform voters that lacked computers, technical skills, the internet or transportation of alternative for requesting a ballot.

“However, that takes us back to the obvious solution, which is to mail everyone absentee ballot applications,” he said.

The groups also criticized Governor Justice’s attacks on absentee voting, saying they “are a direct assault on voting rights.”

“We know that absentee voting increases participation and ensures that more Americans – including members of our military – have their voices heard. We also know that states with long established vote-by-mail programs run them smoothly and expand voter engagement in their states,” said Julie Archer, Coordinator for WV Citizens for Clean Elections. “We cannot allow the right to safely vote become a polarizing issue. We can protect West Virginia voters and protect the vote during this pandemic. And we must.”

Environmental justice organizations and organized labor joined the groups in their call to replicate the voting and absentee ballot request options that were used in the primary. 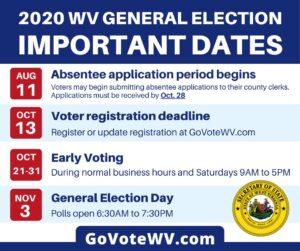