Charleston, WV — With the U.S. Census Bureau set to release local-level data today — data that states will use for drawing new Congressional and legislative district lines —  WV Citizens for Clean Elections is emphasizing the key role fair and impartial courts will play in the process, serving as a bulwark against efforts from lawmakers looking to divide neighborhoods and silence certain voices for their own political gain.

The WV Legislature’s Joint Committee on Redistricting is in the process of holding a series of public hearings around the state to allow West Virginians to weigh in on the process of redrawing the boundaries of legislative and congressional districts. Today’s data release marks the start of the once-a-decade process of creating new district maps, with huge political and policy implications for the next 10 years.

“The public hearings are a positive first step in what should be an open and transparent process, but with the final say left to lawmakers there’s a risk they will put their political ambitions over the needs of their constituents. There’s a reason West Virginia was identified in a recent report by the non-profit RepresentUs as one of a few states at ‘extreme risk’ of having unfair districts for the next decade,” said Julie Archer, Coordinator of WV Citizens for Clean Elections. “If we want to get serious about having fair districts, the U.S. Senate must pass legislation like the For the People Act, which would establish an independent commission to oversee the map drawing process. Short of passing the For the People Act, it will be up to our courts to keep our leaders honest when it comes to drawing community district maps. Without fair and impartial judges, our state can’t count on having fair maps.

WV Citizens for Clean Elections is a coalition of organizations working to increase transparency and accountability in West Virginia elections, and advance reforms to strengthen democracy and ensure fairness and impartially in our courts. 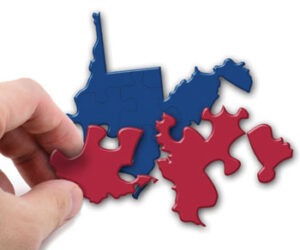