Two candidates have qualified to receive public financing during for this year’s Supreme Court election.  Beckley lawyer and former legislator Bill Wooton and Justice Brent Benjamin were both certified to receive public funds by the State Election Commission (SEC) (read more here and here) despite objections from Beth Walker, who is challenging them in the race. Former Justice and state Attorney General Darrell McGraw and Clay attorney Wayne King are also running for the seat currently held by Benjamin.

Walker is also expected to appeal Benjamin’s certification after the SEC rejected her challenges to more than 500 individual donors who made qualifying contributions to Benjamin’s campaign.

After the Commission unanimously approved Benjamin to receive public financing, his attorney Anne Charnok read a statement of appreciation from Benjamin.

In his statement, Benjamin noted, “In creating the Public Campaign Finance program, the Legislature recognized that increasingly expensive judicial elections funded by high-dollar interests have created a concern among voters that such interests have too much influence in our judicial system.”

“The Public Campaign Finance program not only enhances public confidence in the fairness and impartiality of our courts, it also ensures that the West Virginian who is able to give just a single dollar knows that his or her participation in the selection process is just as important as the $1,000 given by a politically-connected insider, special interest or out-of-state group,” Benjamin said.

You can read Justice Benjamin’s full statement to the Commission here.

Regarding Walker’s challenges to Wooton and Benjamin’s participation in the public campaign financing program, State House reporter Phil Kabler pointed out in his recent column that, “Citizens Against Lawsuit Abuse is quick to call out instances of abuse of the judicial system, except possibly, when it benefits them.”  Kabler called the Walker campaign’s efforts “petty at best, malicious at worst.” 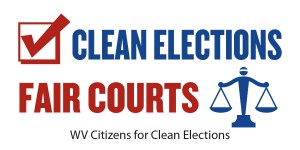