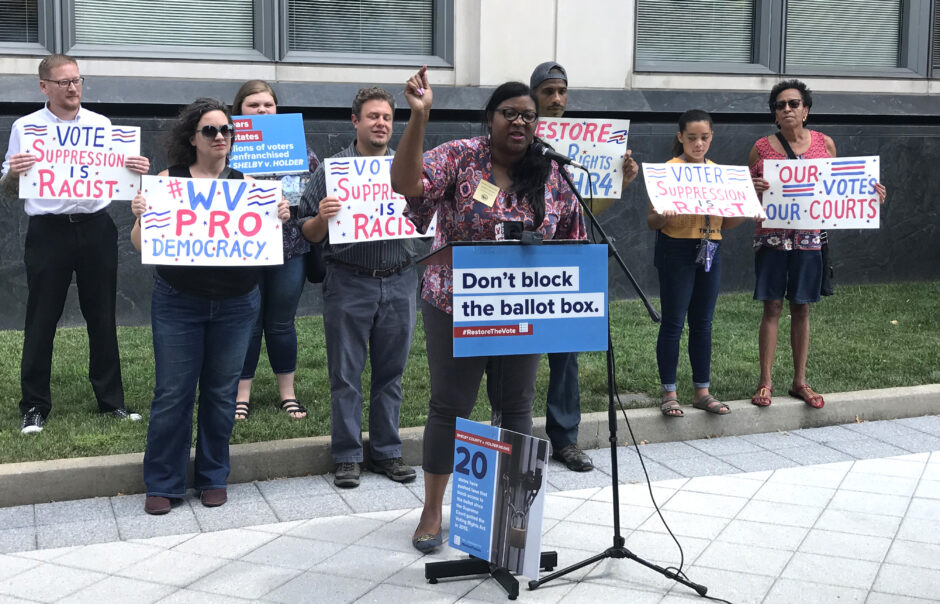 Delegate Danielle Walker (D-Monongalia) stopped by the event and fired up the crowd.

At noon on Tuesday, August 6, dozens of people gathered outside the federal courthouse in downtown Charleston, WV to mark the 54th anniversary of the passage of the Voting Rights Act.

We were there to commemorate the landmark voting rights legislation, but we could not celebrate its ongoing achievements, because, in 2013, five justices on the U.S. Supreme Court gutted the VRA in the Shelby County v. Holder case. Since that decision, restrictive voting laws have been passed in 20 states. Voter ID laws, gerrymandering and voter purges are putting up barriers to voting for all people, but especially young people and people of color.

So, we gathered on the anniversary of the VRA to join with advocates nationwide in demanding that Congress stop the rise in voter suppression and move to restore the rights the Act was supposed to guarantee by passing HR-4, the Voting Rights Advancement Act.

We must fix the Supreme Court’s abysmal ruling. Protecting the right to vote for every citizen is critical to a functioning democracy, which is why we must pass the HR-4, the Voting Rights Advancement Act.

That was the message delivered by our inspiring, fiery speakers:

The event was broadcast on FB Live. Find archives of the speeches on the WV Citizens For Clean Elections FB page.

News coverage included articles in the Charleston Gazette-Mail, the Beckley Register Herald, on MetroNews and WOWK.

“We’ve come too far to turn back. We’re urging you all to contact your congressional representatives. Do all you can to insist on the restoration of the Voting Rights Act.” Rick Martin, Charleston WV @NAACP. #RestoreTheVote #WVProDemocracy #FairCourts https://t.co/KVabllGNdD

"Mountaineers are always free & so I know if we work side by side, it will be something true. But here we are again with another beast. The sin of anger & hate keeping us from having our full rights as citizens." – Katonya Hart, WV @NAACP #RestoreTheVote https://t.co/DSFg2LW5RF

Thanks so much to everyone who came out, thanks to our emcee, Carey Jo Grace, with the WV Healthy Kids and Families Coalition, and thanks to our core planning team!

If you haven’t doesn’t so yet, contact Congress to say you want HR-4 passed.

And by all means, do check on the status of your voter registration. In the May 12, 2020 West Virginia primary we will be selecting—that very day, no further voting in November—several WV Supreme Court Justices.

On the November 3, 2020 general elections, we will elect our next Governor and other statewide office holders, as well as the next President of the United States.

If you feel like you just don’t want to participate in politics, that’s what the powers-that-be want! They would love it if you don’t vote, and they are actively trying to suppress your vote in so many states. VOTE! 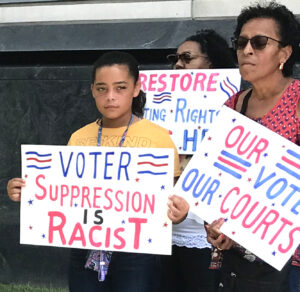 Alerts and Updates  Oct 18, 2021
Join Us for the Freedom to Vote Relay